This was one of the last live tapes I made with my walkman – it died shortly after this show. This was a show if I remember right that was at a WPRB dj’s house or parent’s house.
I’m not sure if I ever knew who’s house it was. We just pilled into a friends car and saw them in this strange setting of a upper middle class house in Princeton NJ. It’s pretty hard to hear the vocals but I wanted to put this up anyway. I hope the band doesn’t mind.

Rear Admiral formed in early 1993 with the lineup of Steve Tiberi (ex Meister Squad, Stinkbomben, Rotgut,) vocals, Bill Rude (ex Tons of Nuns,, Stinkbomben, Rotgut: future Bad Ronald; current The Koosmans) guitar/vocals, Bill Jones (ex Bottom Feeder) bass, Brian Sussman (ex Tons of Nuns, Stinkbomben: future Bad Ronald) drums. This lineup played its first show at Silk City in June 1993, having been booked as Kernel Mustard, changing the name to Rear Admiral before taking the stage. Six songs were recorded with Art DiFuria in late 1993; two released as ‘Up Y’Oars’ in 1994 on Black Hole Records; the other four released as ‘Chin Music’ in 1995, the only release on Bill’s Ahoy! label. Brian left shortly after these recordings were completed, replaced by Tommy Jerseycow (Stuntmen). The last show was opening up for the Cows at the Khyber Pass in April 1995. Bill, Brian (now on bass), and Tommy played one final show as Rear Admiral, opening up for Ruin at Upstairs at Nick’s in 1996.
Thanks Bill for all the info, flyers & reviews

MediaFire Zip of both 7″s

The Mermen are an American instrumental rock band from San Francisco, California formed in 1989.[1][2] They have since moved to Santa Cruz, California.

The group’s sound was originally rooted in surf and psychedelic rock music of the 1960s, although they have made “sincere attempts to get away from the surf music label”[3] and currently delve into many genres, mainly driven by the melodic visions of the band’s founder, songwriter, and guitarist Jim Thomas. The band’s music is entirely instrumental and “does a good job of defying description”.[3] The Mermen perform as a power trio: electric guitar, electric bass, and drums, with occasional guests for live concerts.

2 Live tapes from the North Star Bar from early 2000’s -Sorry I didn’t get the song titles,. Thanks to Flipo from the Excuses for the tapes.

In New York in the mid-‘80s, four veteran New York musicians united to form the Del-Lords: Scott Kempner from the Dictators, Eric Ambel from Joan Jett’s Blackhearts, future Cracker drummer Frank Funaro and thundering bassist Manny Caiati. Key songwriter Kempner said his vision “was to create a band that would feature four singers performing my songs — an East Coast Beach Boys if you will.” But rather than singing about girls and cars, the Del-Lords sang about things that mattered to them: the everyday grind of life and how it affected the band and those around them.
–Greateful Web


MediaFire Zip of all files

Hot Rods to the Gods – Live on WKDU

Thanks for the tape Jackie

The Connells from Chestnut Cabaret on Feb. 16, 1988. Led by guitarist Mike Connell (his brother David is the bassist), this Raleigh, North Carolina quintet possesses a fragile, vaguely Celtic melodic sense that nicely complements the introspective lyrics, making for music that combines the best impulses of Southern guitar jangle and the sensitive singer/songwriter tradition.
Trouser Press

If Live on Jackie’s show on WKDU from 1990. If at the time was Chaz (Unloved) and Chris Hunter on guitar (Little Gentlemen, Goats, Mothra &  DTO  ) and Stroller from Red Paint People.

Thanks for the Tape Jackie

Halo of Flies were Amphetamine Reptile Records kingpin Tom Hazelmyer with in-house engineer Tim MacLaughlin on bass & John Anglim on drums,
This is a live tape from when they played the Khyber on March 15, 1990.
Thanks for the tape files Don Sheluga & the song titles – Christian.

Philadelphia band Still Stupid Live on Jackie’s show on WKDU from December 20th 1988. A great mix of Punk, Hardcore, Garage and Psych with some inspired choices of covers (especially Love Power from the Producers) Then below that some videos 1 of their demo tape and 2 live clips from JC Dobbs and some flyers.
Thanks for the Tapes Jackie & Diego and the song titles Jim Canfield

Still Stupid-when I get that feeling live at JC Dobbs

Trained-Attack-Dogs Live from CBGBs from the Rave Records cassette version of the Pizza EP.
To hear the ep and other release go to the www.kenkramar.com . 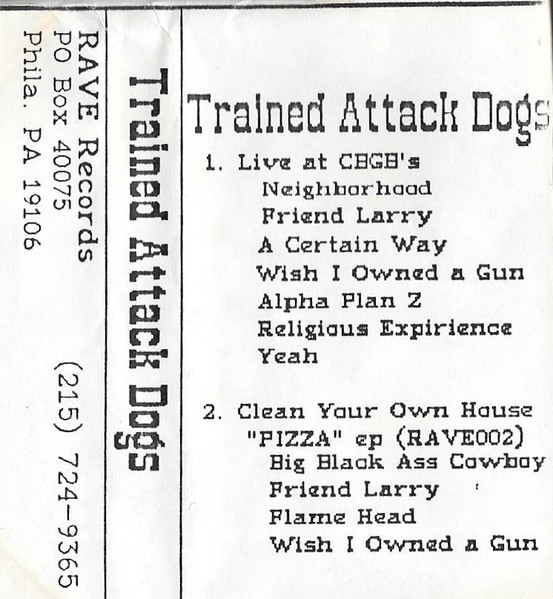 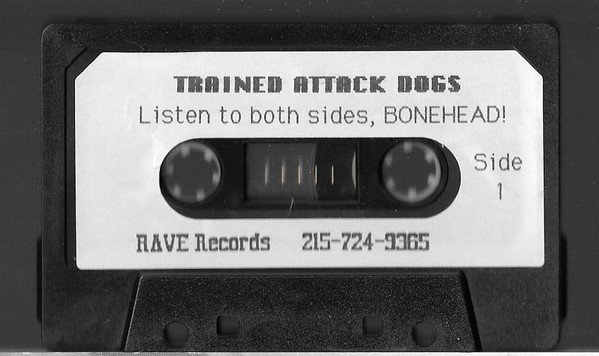